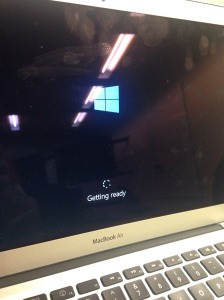 I’m always up for a frustrating challenge that involves banging my head relentlessly against a wall until one side gives in. That’s why I love my MacBook Air. Boot Camp doesn’t officially support Windows 10 right now, and my MacBook Air is too old to support booting from USB. At least that’s what Apple wanted me to believe.

The following is the tedious process I went through to “trick” my MacBook Air (3,2 / Late 2010) into letting me “burn” a Windows 10 ISO file onto a removable USB in order to put Windows 10 on my MacBook. A bit of intuitive tinkering with this process should allow you to get this to work for most models.